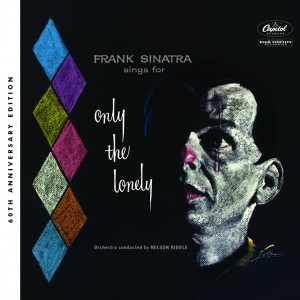 For Frank Sinatra, 1958 was a very good year. Two of his studio albums received Grammy nominations for Album of the Year. In January, Capitol released a Sinatra travelogue album, Come Fly With Me, recorded with Billy May & His Orchestra. Then in September, the label released a distinctly different LP, one filled with somber torch songs: Frank Sinatra Sings For Only The Lonely, with orchestration and arrangements by Nelson Riddle. As if the title weren’t enough to convey the theme, the album cover depicts Sinatra as a weeping clown (à la Pagliacci), and 48 seconds into the opening track, Ol’ Blue Eyes croons, “The songs I know only the lonely know/ Each melody recalls a love that used to be.” Pianist Bill Miller’s coloration adds to the tearjerker mood of the title track, and listeners might require a handkerchief. (The late Frank Sinatra Jr. frequently quipped, “The album is so sad it should be sold by prescription only.”) The LP proved to be a chart-topping smash. Songs such as “One For My Baby (And One More For The Road)” and “Guess I’ll Hang My Tears Out To Dry” became Sinatra concert staples.

Capitol’s 60th Anniversary Edition of Only The Lonely is available in multiple formats, including a double-CD deluxe set that includes the original 12-song program in both a mono mix and a new stereo mix, as well as four bonus tracks. Capitol’s 1987 CD reissue included the bonus tracks “Sleep Warm” and “Where Or When,” but those tunes aren’t a part of the new anniversary edition, which instead includes an alternate take of “Guess I’ll Hang My Tears Out To Dry” and a poignant version of “One For My Baby” with just vocals and piano.

Sinatra fanatics will want to check out the two previously unreleased session takes. One of them finds the singer, a perfectionist, struggling with “Lush Life”—a tune that didn’t appear on Only The Lonely (or, notably, on any of his other albums). The other new nugget is a remarkable 17-minute collage in which Sinatra tries six times to tackle all or parts of “Angel Eyes”—a tune that did make it onto the official LP. At one point, a frustrated Sinatra barks to the control room, “I can’t find that note. I don’t know what the hell it is.” These fly-on-the-wall session recordings depict high-caliber musicians sweating the details, with Sinatra subtly improvising on each take, while orchestra members remained steadfast. All those bouts with “Angel Eyes” are a fascinating reminder that although Sinatra is now a timeless icon, he was also a mere mortal.