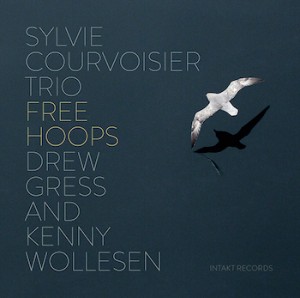 On the third album by this superb trio, pianist Sylvie Courvoisier balances her compositional rigor and improvisational élan with astonishing results. Each of her nine compositions embraces a specific idea, all tied to a particular dedicatee, and her process fans out from there, taking flight thanks to the connections she’s developed with bassist Drew Gress and drummer Kenny Wollesen. The title composition, for example, was written for longtime partner—in life and music—violinist Mark Feldman, and she says its steeplechase theme was inspired by “the weird figure she plays.” Indeed, the composition hurtles breathlessly, with rapid-fire jabs and up-and-down phrases meticulously sculpted by the whole band, before it opens up to a plush, rolling pattern with echoes of Ahmad Jamal.

Nearly all of the pieces here deftly pack in such shape-shifting detail, whether the stuttering “Lulu Dance,” where Gress masterfully pulls away from the cycling theme with seemingly spontaneous but fully scored asides, and the feline groove (the piece was composed for her cats) comes to a halt for a moment of quixotic give-and-take stabs and slurs. Naturally, “Just Twisted,” composed for John Zorn—who pushed her to form a trio in the first place—goes through numerous, often breathless episodes, including a hard-driving section that sounds a bit like a Henry Mancini detective theme. “Birdies Of Paradise,” written for her ornithologist bassist, is built on imaginary birdsong, Courvoisier mimicking a woodpecker with some of her inside-the-piano clanking. Despite the references, there’s nothing pastiche-like about Free Hoops, which positions the group as one of the most exciting piano trios at work today.