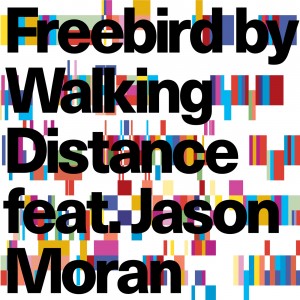 Anxious to avoid the dreaded sophomore slump, some groups try to play down expectations. If anything, for its second album, Walking Distance doubled down on an album featuring pianist Jason Moran that rearranges, deconstructs and sometimes simply explodes familiar Charlie Parker tunes.

Freebird excels when the band relaxes and lets it rip. “Bigment” opens with a steamy, bluesy vamp before turning to a maniacally paced frenzy of chord changes and riffing. Only bassist Adam Coté’s heavy, hypnotic notes anchor the thing to earth. If there’s a conceptual strain to mashing up Parker’s “Segment” and “Bigfoot,” it’s not evident. However, some songs feel more like ideas than fully formed performances. “Lost & Found” can’t escape the boundaries of its own in-joke and meanders; “Quasar Halo” similarly struggles to find its grip.

Performances from Moran, alto saxophonist Caleb Curtis and tenor saxophonist Kenny Pexton frequently lift songs with stellar maneuvers. Playing Parker’s instrument, Curtis in particular shines amid homages and commentaries on the legend. However, Moran comes away with the best solo—a dramatic effort on “Fly By.”

Producer Ben Rubin makes his presence strongly felt as well. His work places each song in a unique setting, adding context and insight to the compositions and performances. He locates some songs in the same lo-fi worlds as Parker’s original recordings.

Freebird isn’t stingy with memorable moments, but a listener’s enjoyment might be tied to their grasp of sometimes-obscure punchlines about Parker’s repertoire.