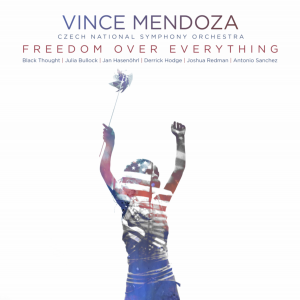 Movie music is an abstraction. By itself, lovely or exciting, depending on melody or drive, but still an abstraction in search of a self. It acquires identity when absorbed into the pictures, dialog and people of human experience. This is why music is so vital in amplifying the passions of love, suspense or action it accompanies on the screen — and why those feelings can be recaptured with such uncanny precision by hearing only the music.

Vince Mendoza, who once aspired to film composition, intends Freedom Over Everything to express the discord of the Trump years through a kind of Third Stream lens. To this end, he composed a “Concerto For Orchestra” in five movements describing a narrative arc. I knew none of this in my initial listening. It sounds like a well-crafted film score. The first movement conjures an aura of uncertainty and tension, then swells into a thundering symphonic density. Strings and brass interact in absorbing ways, to which I subjectively assign my own images, based largely on how I’ve been conditioned by earlier film scores. Josuha Redman’s tenor cameo weaves lightly through “Meditations” without dominating. Mendoza’s orchestrations exhibit a fine mastery over the emotional vocabulary of musical verisimilitude and mise-en-scène, but offer little jazz feel.

Imagine my surprise when I read the notations and learn the narrative I should have imagined. I have completely misinterpreted his intended story arc. Have I failed as a listener? No. This music is rooted in his reality, not mine. That will take time. Meanwhile, enjoy.