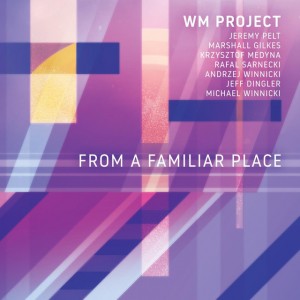 The band name WM Project nods to the first letter in the surnames of pianist Andrzej Winnicki and tenor saxophonist Krzysztof Medyna, who are longtime collaborators. They performed together in Europe in the 1980s before relocating to the United States, and in the 1990s, they were members of the band Electric Breakwater. Also, they were both in the band the Komeda Project, which was dedicated to the music of Polish composer Krzysztof Komeda and recorded a few albums, including 2009’s Requiem. For their new band’s debut, the pianist and saxophonist have assembled a terrific lineup: trumpeter Jeremy Pelt, trombonist Marshall Gilkes, guitarist Rafal Sarnecki, bassist Jeff Dingler and drummer Michael Winnicki, who is Andrzej’s son. “Looking Ahead”—an Electric Breakwater tune that has been recast in an arrangement that features Pelt—displays the muscularity of a large ensemble and the nimbleness of a combo. Michael Winnicki’s “Das Bounce” illustrates the band’s mastery of shifting moods and time signatures, while Andrzej Winnicki’s buoyant “Praeludium” offers driving momentum, a potent bass line and a horn riff that becomes an earworm. The bulk of the album consists of original compositions, but the program’s two standards, “Take Five” and “Mercy, Mercy, Mercy,” are refreshed with creative arrangements. The WM Project will promote the album with a March 29 concert in New York at the Kosciuszko Foundation, a center of Polish culture located at 15 E. 65th St.