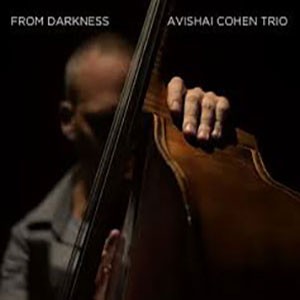 For bassist Avishai Cohen, the trio is a natural fit. Though his latest album, From Darkness, is only his second release as a trio leader, it achieves what every trio recording aspires to: the unity of three voices becoming one. That Cohen can create such genuine chemistry with his bandmates speaks to his profound vision and inspired leadership. He honed his trio chops early on as a member of Chick Corea’s New Trio ensemble, and would later pilot his own trio featuring pianist Sam Barsh and Mark Guiliana. On this album, the Israeli bassist is joined by pianist Nitai Hershkovits (with whom he recorded the 2012 duo album Duende) and drummer Daniel Dor—emotionally attuned players who take easily to Cohen’s compositional style. Hershkovits’ touch is stately and refined, especially on the gentle “Halelyah,” which finds his delicate phrases hovering above Cohen’s waltzing bass. Dor is brave and inventive. On “C#–,” a pulsing tune built on a jagged ostinato line, he uses the cymbals to masterful effect. As is typical for a Cohen album, the songs on From Darkness draw from diverse influences, with styles ranging from electro-funk (“From Darkness”) to tone poem (“Ballad For An Unborn”) to Latin groove (“Lost Tribe”) to jazz standard (“Smile”). In each one of these idioms, Cohen and his crew prove to be fluent and articulate speakers, intent on realizing a shared vision. It’s the kind of cohesion all trios strive for, but only the very best attain.