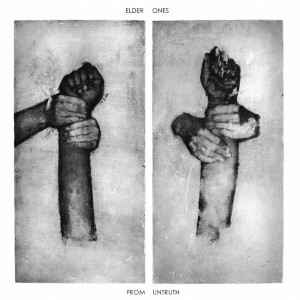 On the first track of her new album, From Untruth, composer Amirtha Kidambi leaps into her takedown of income inequality without preamble. “Eat the rich or die starving,” she sings to the wheezing drone of her harmonium on “Eat The Rich.” But boldly confrontational vocals are only one of the many pointed arrows in Kidambi’s quiver. She has a lot to say—and many musical devices through which to speak.

As an improvisational singer, Kidambi draws easily and in equal measure from free-jazz, indie rock, and Carnatic solfège and idioms. Her band, Elder Ones (soprano saxophonist Matt Nelson, bassist Nick Dunston and drummer Max Jaffe), match Kidambi in her anarchic intensity: The tune “Decolonize The Mind,” for example, opens with almost five minutes of a wildly expressive free-improv—caterwauls, a squealing horn and deep thrumming in the bass—before falling into a steady, hypnotic groove. “We won’t be silenced,” Kidambi intones before a perfervid spoken-word section; the tune ends in screams and static. This is not stuff that your average jazz quartet can do—or do so well.

Kidambi intersperses just enough conventional musical moments throughout the recording to keep the compositions from reading as completely dystopian. A soothing unison between the voice and the harmonium, a straightahead lick in the bass, a familiar groove in the drums. And on the title track, the last of four extended compositions, a floating, futuristic electronic line followed by the lyrics, “From darkness into the light ... .” This little drop of hope in the recording’s final moments changes the overall message of From Untruth. We can do better, Kidambi suggests.