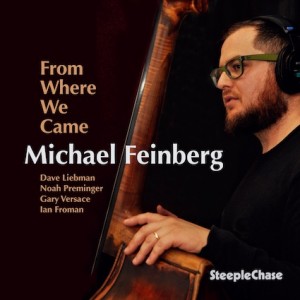 Michael Feinberg tackles the concept of place on From Where We Came, the bassist’s originals taking their titles from the names of cities that fostered groundbreaking talents—a device that suggests more than a passing interest in the formative conditions begetting greatness.

Feinberg opens the album with an unaccompanied bass solo, a teasing set up for his quintet’s thunderous entrance on “Louisville.” In honor of Kentucky-born boxing champ Muhammad Ali, the tune’s jouncing head gives saxophonist Dave Liebman—a heavyweight in his own right—space to scale skyward on soprano, while Noah Preminger soars on tenor. The adventuresome playing of the reedists lends the right amount of effervescence to the group’s hefty sound; throughout the recording, the rhythm section—which also includes pianist Gary Versace and drummer Ian Froman—bears the amplitude of the ensemble. The drummer’s sophistication with a coolheaded bop groove animates “Pontiac,” for drummer Elvin Jones; Versace’s fleet, intervallic solos brighten “Cairo,” for baseball legend Jackie Robinson; and Liebman and Preminger finesse the spry melody of “East St. Louis,” for Illinois native Miles Davis. Not all of the tunes are so locomotive, however. Feeling, more than energy, invigorates the languid “Tryon,” an homage to singer Nina Simone, and a slow swing undergirds the John Coltrane tribute “Hamlet.”

The album closes with “Nogales,” a gamboling uptempo track inspired by Charles Mingus; on its lone-bass intro, you can hear Feinberg keenly lean into each curve of the solo. Such prowess suggests Atlanta, Feinberg’s hometown, is a good place to be from.