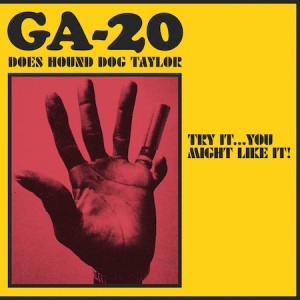 Six-fingered Chicago bluesman Theodore Roosevelt “Hound Dog” Taylor always knew how he wanted to be remembered, declaring, “When I die they’ll say, ‘He couldn’t play shit, but he sure made it sound good!’” His first album, released in 1971, was also the first album on Alligator Records, Hound Dog Taylor & The HouseRockers. Bruce Iglauer founded Alligator for the specific purpose of recording and releasing it. Robert Christgau once referred to Taylor and his sidemen as “the Ramones of the blues.”

You can hear all this on Try It … You Might Like It. And yet the album doesn’t sound stuck in the past. Clocking in at just under 39 minutes, this is 10 tracks of hard-driving blues-rock that feels more like early White Stripes at its loosest than something you’d hear at a daytime blues fest.

For this release, Alligator Records collaborated with Colemine Records, an expertly niche label out of Loveland, Ohio, that puts out funk, soul and beyond. Colemine owner Terry Cole spoke to DownBeat about what this partnership accomplished, explaining that while he’s not a fan of contemporary blues, and more into traditional blues, he has a lot of respect for what Iglauer has accomplished with Alligator.

“We felt this was a good opportunity to push this traditional vibe and agenda to people who are into the contemporary blues scene that Alligator has its finger on the pulse of, and put what we think is cool blues in front of those folks, while simultaneously making people on our side of things aware of Hound Dog Taylor and the history of Alligator Records,” Cole said. “The overall, overarching goal of the group is to make traditional blues cool and to make original music in 2021 that is in that vein, but also relevant and fresh.”

It’s all of that. And, given that it’s trying to reach two somewhat disconnected audiences, the title is perfect.