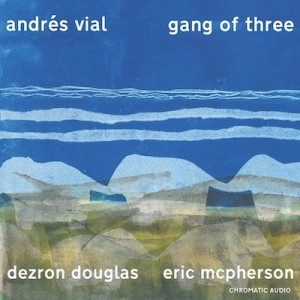 Montreal-based pianist Andrés Vial gained considerable attention and acclaim for his 2018 quartet outing, Andrés Vial Plays Thelonious Monk: Sphereology Vol. 1. With subsequent volumes of Sphereology in the works, Vial has decided to continue documenting his own development as a composer with the release of his fifth album as a leader, Gang Of Three, a trio date featuring nine original compositions recorded in a single session last April.

Joining Vial are bassist Dezron Douglas, who returns from the Sphereology sessions with his beautifully resonating acoustic sound, and drummer Eric McPherson, a new collaborator who fuels the intensity of the music without overpowering it. Vial, who studied jazz drums during his formative years, takes a percussive approach to the keyboard, using just enough touch to bring a melody to the forefront or finessing his attack to coax darker tonal shades from the piano. Vial’s inner drummer emerges in a couple of tunes built upon polymetric/polyrhythmic concepts: “Chacarera Para Wayne” is an intriguing piece that’s based on a northern Argentinian folk dance, and “Put Your Spikes In” draws inspiration from a central African Gbaya folk song (“Ba-di-heim-ha-naa-dai”).

Other highlights include album opener “Atonggaga Blues,” a 12-bar blues in 7/4 that establishes an exploratory vibe; the playful “Gang Of Three,” with its funky New Orleans feel and stylistic references to the work of pianists Monk, Bud Powell and Elmo Hope; “Montaigne,” which rides a shifting samba groove through an unsettling terrain of harmonic ambiguity; and the finale, “Cascadas,” whose descending chord melody sounds like a musical waterfall.