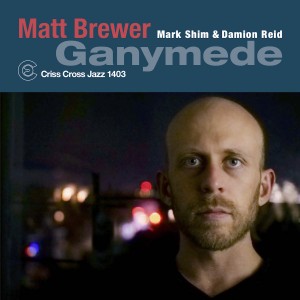 Caveat emptor: Matt Brewer will swing your head off your shoulders, even when he’s not playing a literal swing rhythm. That happens a lot on Ganymede, the bassist’s third album and first fronting a trio. Like Brewer, tenor saxophonist Mark Shim and drummer Damion Reid are protégés of M-Base co-creator Greg Osby, surely a source for the rhythmic complexities they exhibit here.

They reserve those twists for their originals; four by Brewer, one by Shim. On Dewey Redman’s “Willisee” and Ornette Coleman’s “EOS,” both “out” pieces, they swing away. They’re looser, but still swinging hard, on Joe Henderson’s “Afro Centric,” which begins darkly, moving quickly into delirium, and on a breakneck take of Ron Carter’s “RJ,” Reid tears into an incendiary solo. “When Sunny Gets Blue” gets a balladic reading, though the troupe quietly subverts it on the bridge, Brewer playing the lead, Shim establishing the chords.

Surrounding these covers are Brewer and Shim’s intricate rhythmic puzzles. The leader’s “Triton” instantly throws the ear off balance—it’s a mixed meter, 12/8 and 13/8—with Shim emoting in angular phrases that threaten to fracture into chaos. The form of his “Don’t Wake The Violent Baby” is nearly impossible to follow, and “Ganymede” is no picnic, either; “Psalm” has a simple melody and funky pulse, but Reid does his best to deconstruct it. If this sounds maddening, it’s easily redeemed: These dense grooves feel just as good as the swingers, and lead to splendid places like Shim’s synergy with Reid’s disjunctions on “Psalm.”