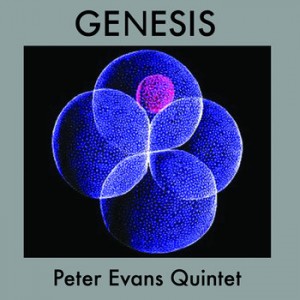 With each new composition, trumpeter Evans seems to reach an even higher level, both in terms of virtuosity and imagination. He also pushes his music to levels which border on the fantastical—so accelerated are they with a flood of convoluted themes, so acrobatic in their near-impossible structures.

Evans takes raw jazz matter and propels it into a zone where willful deformity is allowed, a feat enhanced by his able henchman, Sam Pluta, whose laptop gobbles up the real-time emissions of the players—Ron Stabinsky (piano, synthesiser), Tom Blancarte (bass), Jim Black (drums, percussion, electronics)—and immediately spits them out in a transmogrified rush of sudden invention.

Pluta’s live doctoring is radical, making this one of the prime examples of electroacoustic jazz, retaining the values of a “traditional” outfit, but sometimes distorting them into extreme cut-ups of tendril-matter abstraction. When Evans solos, his actual sound is quite swinging, while Stabinsky doggedly jags his keys, breaking out in river-runs. Blancarte’s bass and Jim Black’s drums maintain freedom and pulse.

Once the four-stage “Genesis/Schismogenesis” gets underway, apparent chaos ensues, but this is an illusion. When Evans pushes the microphone into his bell, he sounds as deep as a trombone, undergoing Pluta’s savage disruption of the source material. The electronics sometimes expand the sonic stage into orchestral scale; the suite becomes so wild and deranged that it actually prompts a faint smile of wonderment.

The five-part “3 For Alice (Coltrane)” initially operates on a subtler plane, its tone-drone producing a melancholy aura. Evans plays in lyrical fashion, although as the mid-point arrives, a greater sense of agitation emerges, bounding into a straightahead jazz passage—which, in these surroundings, sounds positively revolutionary.

By the time it reaches the climactic “12 Earthly Branches” section, the crazed nature has returned, with a frantic acceleration of electronic jitters.