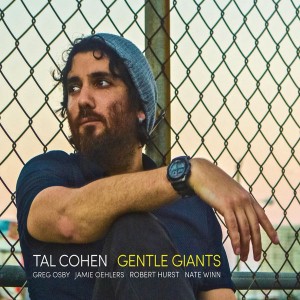 Pianist Tal Cohen grew up in Israel, moved to Australia when he was 16 and began to travel extensively in 2010. He made his recording debut as a leader in 2011 with Yellow Sticker and gained experience working with saxophonists George Garzone and Joe Lovano. While Cohen’s music reflects his classical background and his roots in Jewish folk, it mostly falls into the modern jazz mainstream.

Gentle Giants begins with “Nardis,” which is given a subtle bass groove by Robert Hurst. This quiet version, taken at a slower tempo, builds up gradually. “Great PK (For Shuli),” which is named after a dog, has a playful theme and is highlighted by a particularly strong solo from Cohen. The ballad “Ducks” evolves through several moods during its nine minutes, from dramatic to childlike, and includes both freer moments and straightahead swing. Of the other pieces, “The Gentle Giant” is a ballad for the trio, “Legacy” is a moody outing with tenor saxophonist Jamie Oehlers, “Gavetsch” heads in several directions at once and “Chopin Meets Abach” is quietly brooding. Throughout Gentle Giants, the musicians uplift this post-bop material, creating music that is always stimulating.