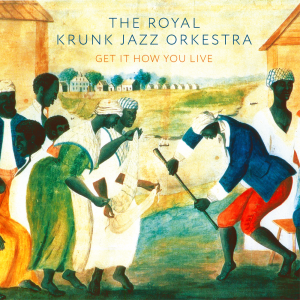 Trumpeter Russell Gunn has been delivering thought-provoking, high-octane, genre-exploding musical goodness since his introduction in 1995 with the album Young Gunn. From Gunn Fu to Russell Gunn Presents… Bionic: Krunk Jazz to his amazingly charged Ethnomusicology series of albums exploring the black experience, Gunn isn’t wearing someone else’s jazz. He’s created his own voice, one where jazz, hip-hop, r&b and pop get up from the family dinner table and dance together in the living room.

The Royal Krunk Jazz Orkestra is perhaps his greatest vehicle for laying down complex, beautiful music for the masses. Get It How You Live is a thoroughly modern big-band recording, and what’s amazing is how Gunn pulled this together by being slightly outside the limelight. Living in Atlanta, the bandleader played a weekly gig at the St. James Live club for more than a year to develop the feel, language and musical material that appears on the album. Once comfortable, he recorded the 19-piece RKJO at The Ray Charles Performing Arts Center at Morehouse College in Atlanta. For those new to “krunk,” it’s a hard-hitting sub-genre of hip-hop that has also spawned an equally hard-hitting form of dance. And this is a record to make you do just that: dance.

The set kicks the doors in with “Sybil’s Blues,” a get-down-and-dance tune that features fellow trumpeter Theo Croker as a guest and some in-your-face soloing by trombonist Saunders Sermons. Gunn summons the spirits with his take on Shai’s 1992 hit “If I Ever Fall In Love,” his trumpet cutting sweet, pure and powerful over a horns-only arrangement that just breathes beauty. “The Critic’s Song” hits hard with the rhythm section of Che Marshal on drums, Tabari Lake on bass and Ali Barr on percussion. But Brian Hogans on alto and Mike Walton on tenor serve up killer solo work—all speed, power and rage. Walton trades eights with vocalist Dashill Smith in a hip-hop/jazz exchange that delivers big time. Beyond this, there are great vocal spots all over this record. Dionne Farris is an incredible singer, who brings her cool neo-soul vibe to tunes like “Fair,” “Hopeless” and “Ballad Of The Sad Young Men.” But the star here is Gunn himself. He’s thinking and making music on a very grand scale. One minute, he makes you want to jump out of your seat and move, the next, he’s got you wiping away a tear.

Gunn is a beautiful trumpeter, but on Get It How You Live, he proves once again that he’s also a massively talented producer, conductor, arranger and talent scout. Get It How You Live is a rare, wonderful achievement—an organic, beautiful vision of what modern music can be.