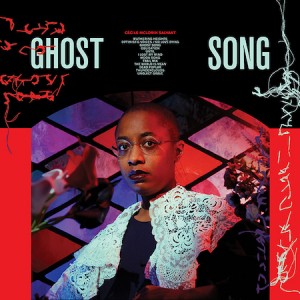 There’s an intellectual playfulness to everything that Cécile McLorin Salvant’s velvety voice touches. It rises and falls with authority, striking highs that flutter and lows that grumble and roar. Her wordplay teases, taunts and tests in a way that forces her to not just sing a lyric, but dive into roles with the zeal of a method actor. Take, for instance, Kate Bush’s “Wuthering Heights,” the opening track from Salvant’s new recording Ghost Song on Nonesuch. When she sings, “How could you leave me/ When I needed to possess you / I hated you / I loved you, too,” she becomes Catherine Earnshaw, the protagonist from Charlotte Brönte’s classic novel of the same name. From there, she flows into a medley of “Optimistic Voices/No Love Dying,” such an unusual, yet satisfying pairing. The former, a classic ditty from The Wizard Of Oz with avant garde overtones folded into the latter, a slow jam and one of the most beautiful ballads of the 2000s penned by Gregory Porter. Ghost Song is an album packed with such songs of ghosts and dreams just out of reach. Its title track drips with the blues of love lost: “I cried the day you decided to go/ I cried much more than you’ll ever know.” The break has her dancing with “the ghost of our long lost love,” and if it’s not enough for her to sing those lyrics, she puts a point of finality on the subject with a children’s choir singing the words though the close. The beauty of McLorin Salvant and her musical world comes from her curiosity, her depth and the artists she brings into that world. The musicianship throughout is impeccable, sometimes challenging, sometimes soothing, always true to the depth of each song. Take, for instance, “Until,” the longest of this 12-tune set. What starts as a quiet duet between the vocalist and pianist Sullivan Fortner, who is a force unto himself when soloing here, evolves into a tango-ish take featuring a terrific flute solo by Alexa Tarantino with James Chirillo plucking banjo and Keita Ogawa dancing beautifully on percussion. Salvant is a thinking person’s singer presenting Ghost Song as a complete work of art, where each song builds to conclusion, like a great play. The jolting “I Lost My Mind” is logically followed by the lovely “Moon Song.” On “Trail Mix,” Salvant gives her voice (not to mention pianists Fortner and Aaron Diehl) a rest as she admirably handles piano duties on this instrumental. “The World Is Mean,” from Kurt Weill’s Three Penny Opera, pours on pure tongue-in-cheek theater. “Dead Poplar” sets to music a letter from photographer Alfred Stieglitz to painter Georgia O’Keefe with heart-aching truth. “Thunderclouds” has the wistful intensity of something written by Norah Jones and sung by Joni Mitchell. Salvant closes with “Unquiet Grave,” an a cappella turn on this traditional and tragic bluegrass ballad. Its quiet mastery perfectly dims the lights as the curtain comes down.

Editor’s Note: If you’d like to read more about Cécile McLorin Salvant’s Ghost Song, check out her cover article in the March issue of DownBeat.