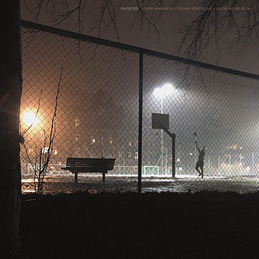 It hurts to get ghosted, for sure, but on Ghosted, guitarist Oren Ambarchi, bassist Johan Berthling and drummer Andreas Werliin ruminate on the feeling at such length they seem to find a way out of it.

Given the title, this may scan as another quarantine-inspired project, but it actually dates back to November 2018. Ambarchi, Berthling and Werliin, three players equally versed in jazz and experimental approaches, met at Studio Rymden in Stockholm to make the music that became this album.

It’s all rooted in the rich tonality and repeating figures of Berthling’s bass, switching between acoustic and electric. Werliin backs him up but never sounds constrained by the role of drummer, tapping out patterns that match his collaborators in establishing himself as a lead instrumentalist. Ambarchi feels his way across this subtly — he begins the second track here, “II” (the song titles give us very little information — they’re called “I,” “II,” “III” and “IV”) with a harmonic figure before stretching into murmuring, expressive guitar effects. It all echoes Can at its most meditative prime.

On “III,” the three players divide up how they introduce their melodic ideas so carefully that you can hear Berthling breathing when he starts his bass line. The track stretches on past 15 minutes, masterfully placing the listener in a quiet mood. Ambarchi’s guitar, impressively, implies there are all manner of instruments here — organs, keyboards, trumpet — when they’re not. “IV” takes us home even more slowly and thoughtfully than everything that proceeded it; a fitting closer.

Mixed and mastered by Joe Talia at Good Mixture in Berlin, the album’s cover tells the tale — a lone figure shoots baskets alone on an expansive court at night. When you’ve been ghosted, you’ve got all the time and space in the world, and Ambarchi, Berthling and Werliin figured out what to do with that and set a soundtrack to it.

Ghosted is out on LP and digital download on April 15.