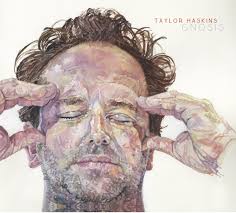 In an interview with the late Nat Hentoff, fusion guitarist Larry Coryell, who died Feb. 19 at age 73, shared his thoughts regarding assimilation of rock music into the jazz tradition: “Contemporary music has absorbed the whole thing called rock or rock and roll,” he said. “It’s not classifiable as either jazz or rock; it’s just music that is as good as the people doing it.” That interview took place in the ’70s, but Coryell’s words were quite prescient, especially nowadays, as numerous musical currents—including r&b, hip-hop and electronic dance music—blend with the waters of jazz. New York trumpeter Taylor Haskins is a prime example of the continuing, genre-blending phenomenon. As a trumpeter, he belongs to a decidedly postmodern camp, pursuing a strain of jazz familiar to fans of Dave Douglas or Ron Miles—he performs in both Nels Cline’s “Lovers” Orchestra and the Guillermo Klein’s Los Gauchos—but he’s also a talented synthesist and composer, and for the past 20 years, he’s been composing and producing electronic music for commercial media. He unites those two styles with calm precision on his new album, Gnosis. It’s a strong artistic statement, one that melds the most salient factors of EDM—trance-inducing grooves, smoldering layers of sound and a skin-tingling sense of rhythmic development—with powerful improvisation and lyrical trumpet melodies. To enhance the effort, Haskins has recruited a team of articulate and equally fluid associates, including drummers Nate Smith and Daniel Freedman, bassists Fima Ephron and Todd Sickafoose, harpist Brandee Younger, keyboardist Henry Hey, guitarist Nir Felder, trombonist Josh Roseman and flutist Jamie Baum. In their respective guest roles, these voices contribute to a shifting tableau of swarming, mesmeric electronica and acoustic jazz of an achingly human sort. The synth-heavy “Hazy Days,” which features Smith’s seismic drumming, zigs and zags from spiky digitized chords to effects-drenched trumpet bleats. Its energy is matched by “Artificial Scarcity,” on which Haskins’ trumpet takes on the metallic keening of an overdriven guitar. But the album reveals a more delicate side on the title track and “Plucky,” both of which feature Younger’s heavenly harp and a late-night, bleary-eyed jazz vibe. This is fusion of an entirely 21st-century sort.