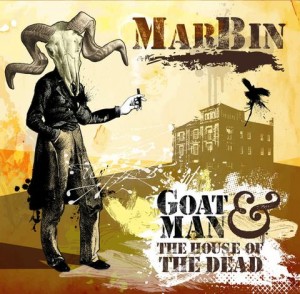 Marbin is a jazz-rock quartet fronted by two Israeli ex-pats, guitarist Dani Rabin and saxophonist Danny Markovitch. The duo started their collaboration in Boston, after Rabin graduated from the Berklee College of Music. A move to Chicago led to a collaboration with former Pat Metheny drummer Paul Wertico in his Mid-East/Mid-West Alliance, but since 2011, the duo has been making its own kind of hard-to-categorize music, blending and bending world music, rock and jazz into open-ended epics marked by jaw-dropping virtuosity and inventive arrangements.

Although Rabin’s electric guitar shredding is a big part of their sound, the term jazz-rock doesn’t really capture the breadth of styles permeating this album. Swing, funk, tango, Afrobeat, gypsy jazz and bop all dance together with hints of klezmer and Middle Eastern music slipping into the mix.

“Goatman” is the most cinematic tune on the album, a low-key outing that sounds like the soundtrack for a spaghetti western, with Rabin alternating between measured, twang phrases and bursts of shredding rock propelled by Nadel’s fluid bass figures.

“Carnival” takes you by surprise by opening with slow, melancholy acoustic guitar and chiming cymbals behind a long, bluesy solo from Markovitch, featuring smooth, sustained notes. Halfway through, Rabin switches to electric and the drums pick up the tempo, establishing a West African groove to boost the unison bursts of melody played by Markovitch and Rabin.

Markovitch compliments Rabin’s pyrotechnic technique by squeezing unexpected sounds out of his sax. He makes it whinny like a horse on “Goatman” and shriek with demented laughter on “The House Of The Dead,” a sultry tango with a Middle Eastern feel.

Jiracek closes the lively funk of “Escape From Hippie Mountain,” the album’s closing track, with a solo that augments the harmonized melodic phrases played by Rabin and Markovitch to bring the set to a satisfying finale.