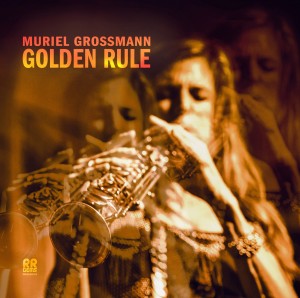 The phrase “spiritual jazz” packs a promise and a threat. It plays into a mythology about the existence of a jazz that totally transcends commercial and material concerns. It also threatens the preponderance of someone explaining how they’re spiritual, but not religious. On her new album, saxophonist Muriel Grossmann avoids both these traps. Golden Rule conveys meditative tranquility and ecstatic joy without ever sounding overly pious. Most of the time, it’s also a lot of fun.

A chorus of instruments drone behind a number of tracks on Golden Rule, but Grossmann’s performance really is what makes it exceptional. Crisp drum and bass lines start off the stellar “Direction” as a guitar comps hypnotically and Grossman showcases her ability to get the best of a tune melodically. She plays a solo so lyrical every bar feels like a discrete composition. Bassist Gina Schwarz follows with a similarly inventive solo, the swirling drone below lending depth and color.

Golden Rule proudly wears John Coltrane’s influence, and “Traneing In” demonstrates Grossmann’s prowess on the soprano saxophone. Schwarz underpins the song with a spellbinding bass line that changes its pattern to great effect when guitarist Radomir Milojkovic takes a knotty, soulful solo. The tightness this group has built in its four years of playing sharpens its brisk take on the composition.

The practice of meditation deeply shaped Golden Rule. The drones underlying its tracks heighten the tension on certain offerings, but feel monotonous after a while. Fortunately, the dynamism of its soloists and the quartet’s telekinetic performance delivers the album’s aim: providing a listening experience akin to transcendence.