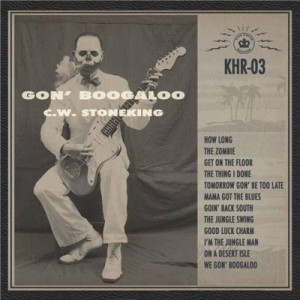 Australian singer-songwriter C.W. Stoneking has been living in the past for most of his musical life—and that’s a good thing. His albums have a rough sound that goes beyond low-tech (it wouldn’t be an exaggeration to call them no-tech). That sonic aesthetic has only gotten more primitive since his 2005 debut, King Hokum. On his new album, Gon’ Boogaloo, the murky mix makes the music sound like it was recorded on a cylinder, but his use of r&b, calypso, ska, Hawaiian rhythms, rockabilly, swing and country music tip you off to the music’s modern origins.

The album kicks off with “How Long,” which pits Stoneking’s distorted electric slide guitar against his abrasive vocals to deliver a collection of catastrophic images, spit out with enough force to make your hair stand on end. It has the feel of a gospel song, but with seedier underpinnings. It’s more properly an anti-gospel tune that declaims, “Ain’t no heavenly home nowhere/ Up above our heads is just a hole in the air.”

A brisk ska-like backbeat drives “The Thing I Done,” a wickedly humorous jam that warns everyone to stay out of this bad guy’s way, lest they meet an ominous fate.

“The Jungle Swing” is a bit of fractured rockabilly, in the manner of Warren Smith’s “Ubangi Stomp,” with a side of “Jailhouse Rock.” The rhythm section—drummer Jacob Kinniburgh and acoustic bass player Andrew Scott—provide off-kilter rhythms to support Stoneking’s brief, distorted solos and backing vocals that sound like The Raelettes.

The four female singers add more sizzling appeal to “Good Luck Charm,” a number that could be a long lost Ray Charles demo. Stoneking’s vocals here have a gruff, gritty quality that works well with the sweet, exuberant support of his female cohort.

The background singers also bring plenty of vivacious energy to the primal calypso of “Zombie” and the street-corner rock ’n’ roll of “Get On The Floor.” The album closes with the primordial groove of “We Gon’ Boogaloo,” an opus that tips its hat to Chuck Berry and Pops Staples, as it celebrates the sounds of the hit 45 singles Stoneking grew up listening to. Stoneking’s ability to capture the sound of early recordings is truly remarkable.