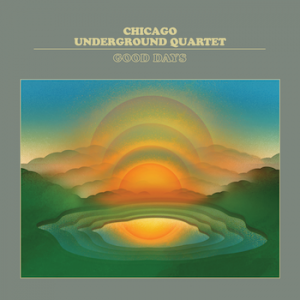 The Chicago Underground Quartet emerged about 20 years ago, an extension of groups that trumpeter Rob Mazurek organized, sometimes as a duo with drummer Chad Taylor, or trio with guitarist Jeff Parker. They’ve since gone their separate ways—and none currently live in the city for which the band takes its name; producer Chris Schlarb helped reconvene the ensemble in California along with keyboardist Josh Johnson, who also plays saxophone in Parker’s New Breed project. On the resulting Good Days, the crew sounds just as cohesive and enthused as when they regularly held court at such hometown clubs as the Green Mill. That bond is crucial to the quartet’s sharp movements throughout this concise album.

On the title track—a quietly striking Parker ballad—the guitarist and Mazurek slowly fill spaces each has left for the other. Mazurek’s tone also provides the ideal complement to Parker’s reverb. The quartet’s precision is especially pronounced on such groove-centric tracks as Taylor’s “Batida.” As the piece moves through a series of sudden hits and pauses, Johnson’s keyboard lines provide both an anchor and side commentary. Similarly, on Mazurek’s “Unique Spiral,” a sense of unity proves crucial as the group’s sharp turns respond to the trumpeter’s lead. Johnson’s repeating synth bass also quietly nudges Parker toward myriad effects on Mazurek’s “Strange Wing.”

Good Days illustrates how much the quartet remains a part of Chicago’s history of free-jazz and open-ended improvisation—especially in Mazurek’s assertive solo on Alan Shorter’s “Orgasm.” That sensibility also is echoed in his solo over sparse and shimmering background chimes on “All The Bells,” with its shades of The Art Ensemble Of Chicago’s little instruments.

As geographically dispersed as these musicians might be nowadays, they’ve never abandon their ideals.