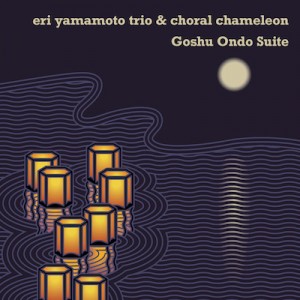 The most revealing portion of Eri Yamamoto’s seven-part Goshu Ondo Suite lies at the beginning of “Part 3,” where the pianist/composer plays alone for three thrilling minutes. In that time, one hears succinct stepwise motion in the left hand against fluid improvisation and vivid chords in the right, all leading to a decisive rhythmic motif—the same motif that strategically reappears throughout the piece. Yamamoto’s ability to extrapolate a concerto from a snippet of music is the notion behind this extended composition, recorded live at New York’s Paul Taylor Dance Studios. The concept undergirding the work derives from the gōshū ondo, a traditional dance melody from Shiga, Japan, a city where Yamamoto each year as a child would attend the Bon Festival, a song-and-dance-filled celebration of generations past. To recall the festival’s feeling of communal joy, Yamamoto wrote full-voiced melodic lines for Choral Chameleon, a 50-person choir. Despite that heft, Yamamoto manages to maintain a balance between the vocals and the superbly refined sound of her trio. By the gospel-tinged finale, what’s left is a nimbly crafted rhapsody of East and West, jazz and folk, singer and player.