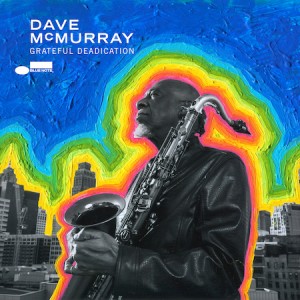 Although improvisation was central to the Grateful Dead aesthetic, jazz has had a curiously distanced relationship with the band’s legacy. Yes, Jerry Garcia recorded with Ornette Coleman on the 1988 album Virgin Beauty, and in the early ’90s, Branford Marsalis sat in with the Dead at stadium concerts. But apart from the group Jazz Is Dead, which included bassist Alfonso Johnson, attempts to rope the Dead into the jazz canon have been few and far between.

Dave McMurray was unfamiliar with the Grateful Dead until he sat in with Wolf Bros., featuring Bob Weir on guitar, in 2018. But that lack of history works to this album’s advantage, because Grateful Deadication focuses not on the Dead’s instrumental style, but on their songs.

That’s most evident on “Dark Star,” a tune that has been the basis for many an extended jam. Here, the emphasis is on the loose, shuffling groove, with almost half the seven-minute playing time given over to the head. Likewise, “Eyes Of The World” is less about stretching out than working a lithe jazz/soul groove, while “Franklin’s Tower” fully celebrates Latin rock roots the Dead’s original only gestured toward.

“Loser,” which boasts an eloquently weary vocal by Bettye LaVette, is the most Dead-indebted performance here, and if the rest doesn’t quite make a case for the band’s repertoire as potential jazz standards, Grateful Deadication will certainly become the smooth-jazz of choice for aging Deadheads.