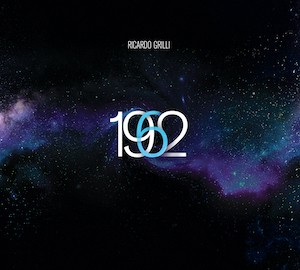 Ricardo Grilli’s fascination with time and space inspired 1962, a followup to his 1954, where the guitarist contemplated the year of his father’s birth, when bebop seemed to invoke the technological advancements of the coming Space Age. This current album is a philosophical sequel and commemorates his mother’s birth year, when bop had begun to decline in popularity and the NASA space program was just ramping up. But instead of relying on the usual electronic tropes to conjure the future, Grilli grounds the album in modern bop ideas. On “E.R.P.,” jagged melodies are doubled in the guitar and Mark Turner’s tenor saxophone, while Eric Harland focuses attention on the ride cymbal. The guitarist was born and raised in Brazil, and he lets its rhythmic lyricism infuse “Lunático,” where a subtle Afro-Brazilian feel presses against Joe Martin’s melodic bass solo. On the slow, infectious samba “Coyote,” Grilli’s understated fret work speaks to his comfort in riding the pulse, as well as his fluency in complex harmonic idioms. The simplest statement here, though, is the one that pulls it all together: the opening track, “1954–1962.” A reverberating solo guitar line, a second shy of two minutes in length, and the first of many stirring moments on 1962.