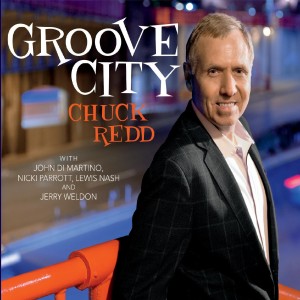 Applause is deserved for album packaging that conveys a clear, straightforward message. The album title and retro font on the cover of drummer-vibraphonist Chuck Redd’s new album, Groove City, tell fans what to expect. And Redd, who has appeared on more than 80 recordings, certainly doesn’t disappoint. In his liner notes essay, Redd explains that fans often ask him what he thinks about when he’s playing. His response is: “Be grateful that you’re here, and visualize the groove.” On his sixth album as a leader, Redd plays vibraphone and percussion, recruiting the great Lewis Nash to handle the drum-set duties. Rounding out the band are pianist John di Martino, bassist Nicki Parrott and tenor saxophonist Jerry Weldon, who contributes to four of the 11 tracks. This crackerjack unit delivers delicious grooves in various forms, whether they’re simmering or smoking on a program that includes a couple of Redd’s compositions (“A Groove For Gail” and “Blues In The Shedd”), two tunes by his former employer Monty Alexander (“Renewal” and “Regulator”), one by Thelonious Monk (“Evidence”) and one by Antonio Carlos Jobim (“Tide,” featuring Parrott’s tasty, wordless vocals). A quartet rendition of the standard “Don’t Let The Sun Catch You Cryin’” illustrates the band’s ability to be simultaneously intense and gentle, hot yet cool, thanks in large part to the fluidity of Redd’s attack. A duo arrangement of Billy Strayhorn’s “A Flower Is A Lovesome Thing” showcases Redd’s skills as a narrator, while di Martino provides the ideal coloration. A fresh version of Ornette Coleman’s “Lonely Woman”—built atop a compelling 16th-note groove from Parrott and Nash—uses the recording studio to great sonic effect. On that track, and throughout the album, Redd and his collaborators are sensitive to the beauty of luminous vibraphone notes that resonate, hanging in the air, tugging at the heart.

A jazz veteran, Redd is highly regarded in jazz circles, thanks to his 15-year stint as a member of the Smithsonian Jazz Masterworks Orchestra, his 19-year tenure with the late guitarist Charlie Byrd and his current position as a faculty member at the University of Maryland. With Groove City, longtime fans and newcomers can savor the satisfying artistry of Redd—a gracious, grateful leader.