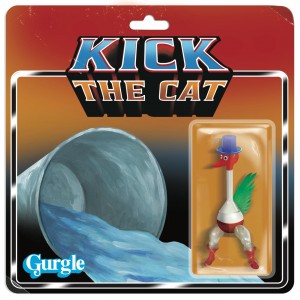 Kick The Cat is back on the prowl this summer, playing live gigs in support of the group’s first album release in more than a decade. Proving itself well worth the wait from the initial needle-drop, Gurgle features the fusion team supreme of Chris Siebold (guitar), Vijay Tellis-Nayak (keyboards), Chris Clemente (bass) and Kris Myers (drums), longtime collaborators based out of Chicago and Nashville whose camaraderie dates back to the late 1990s. The group’s fourth album overall, Gurgle marks a major new entry in the annals of progressive jazz-rock and announces Kick The Cat’s renewed dedication to their craft. It also shows what’s possible when crafty musicians — with the daring of mad chemists — apply large doses of modern ambient effects to already complex fusion formulae. The result is a tasty mixture of prog-rock tones, advanced harmonies, angular melodies, cerebral improvisations, cathartic ostinatos, funky hooks, fuzzy analog warmth and extra-dimensional atmospherics. An abundance of musical humor lightens the mood of this seriously ambitious 11-track program, which consists of all original compositions written by band members Clemente (five), Tellis-Nayak (four) and Siebold (two). Listeners with an ear for the music of Weather Report, Return To Forever, King Crimson, Yes and other chops-busting ensembles of the plugged-in variety will easily relate to Kick The Cat, whose arena-level audacity and ass-kicking attitude should make their live shows a thrill for just about anyone who’s ever felt the urge to rock out, or space out to otherworldly sounds. Upcoming performances include a July 8 gig at City Winery in Nashville; a July 14 set opening for Big Something at the Aggie Theatre in Fort Collins, Colorado; and a July 15 encore appearance with Big Something at Cervantes Masterpiece Ballroom in Denver.