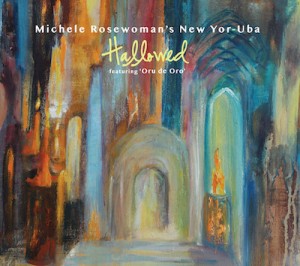 Michele Rosewoman’s juggernaut ensemble made its 1983 debut at The Public Theater in New York. But it took the pianist almost 30 years to record New Yor-Uba: A Musical Celebration Of Cuba In America, her 2013 album that superbly sets modern American avant-garde jazz inside sacred Afro-Cuban rhythms. Fortunately, it took only another six years for her to release Hallowed.

Master percussionist Román Díaz serves as the music’s spiritual guiding light, as the bandleader’s originals call to various Santeria deities. In addition to some of the stirring harmonies, concocted by a five-piece horn section, it’s Rosewoman’s sterling piano playing that makes the music burst with such fresh aplomb, sounding simultaneously ancient and futuristic.

She frees herself from the need to anchor the music with montuno and tumbao patterns, while her estimable piano improvisations are in service of the music, instead of simply being an exhibitionist showcase. Her restive, percussive playing is the secret ingredient, even as the horns dispense fragmented motifs that sometimes expand into harmonically striking, impressionistic accompaniments. But when the pianist’s instrumental work comes more to the fore—as on the sparkling “Color Crown” or the title track—the brilliance of her musicality shines all the more.

Overall, it’s Rosewoman, the composer and superlative bandleader, who reigns supreme on this near-flawless outing.