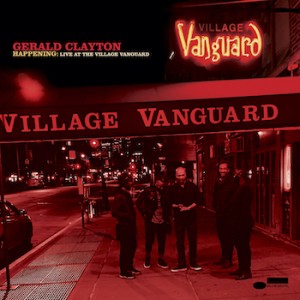 The timing of this release imbues it with melancholy and hope. This year’s coronavirus pandemic put most live performances to a halt for much of 2020 because of worldwide shelter-in-place executive orders. So, the transportive splendor of a concert, captured at The Village Vanguard, seduces jazz lovers in a state of nostalgia for intimate spaces, carefree socialization and visceral performances.

When Gerald Clayton’s quintet convened at the Vanguard in April 2019, it’s unlikely that the pianist had any idea that a year later, New York would look like a ghost town. Ten years after his debut leader date, Happening: Live At The Village Vanguard marks Clayton’s first release on Blue Note Records and makes the recording auspicious on its own terms.

Clayton’s transfixing reading of “Body And Soul” resonates with emotional weight and new meaning in these uncertain times. The bandleader approaches the song with pensive grace as he slowly unravels thick, striking chords, before exploring the timeless melody. Marcus Gilmore’s caressing brushwork and Joe Sanders’ big-boned bass lines gently propel Clayton’s improvisations forward. The leisurely pace and sublime manner in which they explore the tune’s melodic and harmonic contours make it seem as if the ensemble has all the time in the world to linger in musical dialogue before its appreciative audience.

Similar sensations come on “Patience Patients” and “A Light”—two of three originals here that are featured on Clayton’s 2017 adventurous Tributary Tales (Motéma). “Patience Patients” evokes a dirge, as alto saxophonist Logan Richardson and tenor saxophonist Walter Smith III blow a somber melody in unison atop the slow rubato momentum. Clayton maps out a probing improvisation, marked by percussive stabs, jolting harmonies and clipped phrases, while the frontline horns drape it in elegy and eventually give way to a suspenseful solo from Smith, and an equally gripping one from Clayton. The song’s restive vibe, paired with foreboding horn harmonies, aptly depicts anxieties associated with the pandemic.

“A Light,” with its jagged piano melody, conveys the stop-start disposition of a tentatively reopening economy. The jerky manner in which Smith and Richardson’s topsy-turvy passages intersect with Clayton’s quaking lines suggests the mania of navigating crowds with minimal human contact.

Given that this thoroughly enthralling album—which also includes delightful explorations of Bud Powell’s “Ceilia” and Duke Ellington’s “Take The Coltrane”—finds Clayton at a new creative height as a stunning pianist, gifted composer and burgeoning bandleader, one hopes that Happening isn’t a document that in the future serves to remind listeners of vanishing jazz venues.

In the unfortunate event that it does, it’ll stand as an invigorating time capsule of an era when early 21st-century jazz thrived in such sacred spaces as the Vanguard.