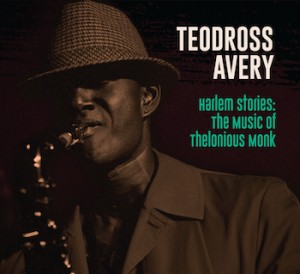 Saxophonist Teodross Avery is an urbane, erudite player who can slide comfortably between worlds. He’s recorded with vocalist Dee Dee Bridgewater in a traditional acoustic context, but also on albums by Talib Kweli, Amy Winehouse and Lauryn Hill. This album is a follow-up of sorts to 2019’s After The Rain: A Night For Coltrane. But that was preceded by 2017’s Post Modern Trap Music. In other words, he’s no mere traditionalist. Still, his exploration of the work of one of jazz’s greatest is both admiring and admirable.

For the most part, Harlem Stories: The Music Of Thelonious Monk is a straightforward treatment of the pianist’s compositions that places the emphasis where it belongs: on indelible melodies and ferocious swing. Avery’s relationship with drummer Willie Jones III goes back to the ’90s, and they’re perfectly aligned throughout the five tracks they perform together. “Rhythm-A-Ning” is taken at a sprint, and “Ruby, My Dear” has a steady r&b groove, but other tunes showcase the locked-down pulse of Frankie Dunlop or Ben Riley’s work with Monk’s 1960s quartet. “Monk’s Dream,” in particular, is about as good as a latter-day interpretation of the pianist’s work gets, with everyone fully engaged and challenging each other. Marvin “Bugalu” Smith, heard on the disc’s second half, is looser, heavier and a much more active drummer; he launches the music skyward. As a consequence, Avery’s own playing on “In Walked Bud” gets wild. And the group’s take on “Ugly Beauty” simply is explosive.