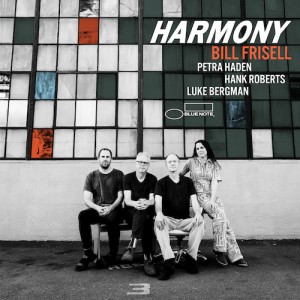 Throughout the album, Haden’s ethereal lead vocals and the trio’s quietly powerful harmonies bring new dimensions to Frisell’s music, magnifying the pensive beauty and perpetual patience that mark his guitar playing. Originally commissioned by the FreshGrass Foundation (an organization dedicated to the vitality of contemporary American roots music) and performed at FreshGrass West! in San Francisco during November 2016, HARMONY features eight compositions by Frisell, some from his existing catalog and some brand new: “There In A Dream” by the late bassist Charlie Haden (who had deep musical and personal ties to Frisell), Billy Strayhorn’s “Lush Life,” Lerner & Loewe’s “On The Street Where You Live,” Pete Seeger’s “Where Have All The Flowers Gone,” Stephen Foster’s “Hard Times” and the traditional “Red River Valley.”

The message behind the music is a celebration of a great old American tradition that Frisell fully embraces and clearly articulates in one simple statement: “Let’s just get together and sing.”