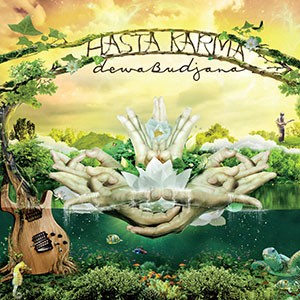 The excellent fusion album Hasta Karmais one for which the names of the accompanists will probably be more familiar than that of the leader—at least to listeners in the United States. For his eighth solo album, Indonesian guitarist Dewa Budjana assembled an incredible band: bassist Ben Williams and drummer Antonio Sanchez (both of the Pat Metheny Unity Group) along with vibraphone icon Joe Locke. Budjana is a star in his homeland, thanks to his work with the rock band Gigi, but his profile is rising among jazz fans worldwide. Fans of ’70s fusion (and Metheny) will find much to embrace on Budjana’s new album. If a key criticism of fusion is that it manages to somehow dilute both jazz and rock, then this album could be cited as evidence for the counterargument that the genre successfully combines the emotional punch of rock with the complex harmonic language of jazz, merged with an expansive, “anything is possible” aesthetic. Nowhere is this more apparent than on the epic, 12-minute journey “Ruang Dialisis.” The track incorporates Locke’s colorful, dreamy vibes work; Sanchez’s evocative cymbal splashes; Indra Lesmana’s moody electric piano; a recording of Budjana’s grandmother singing a traditional funeral song, her vocals digitally treated to create a ghostly effect; and a nearly two-minute section of cacophonous squall that could have been lifted from a heavy metal concert. But that noisy section is an anomaly, and that particular track is immediately followed by “Just Kidung,” the first two-and-a-half minutes of which wouldn’t sound out of place on a smooth-jazz radio station. Throughout the album, Budjana spices his compositions with intricate, pulse-raising fretwork that avoids mindless grandstanding. So what’s next for Budjana? Earlier this year, he was in the studio with another amazing ensemble: Jack DeJohnette, Tony Levin and Gary Husband. We can’t wait to hear the results.