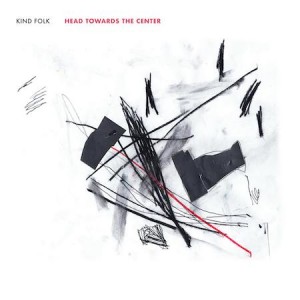 The second Kind Folk album was planned carefully, and recorded in a hurry, but the music has an almost zen-like calm. The group formed and released its debut, Why Not, in 2018, but then trumpeter John Raymond moved to Indiana, and drummer Colin Stranahan headed to Denver to ride out the pandemic. The group members stayed connected online, and finally reconvened in June 2021: two days of rehearsal in bassist Noam Weisenberg’s Brooklyn apartment, followed by a day in the studio. Head Towards The Center contains five original compositions — “Power Fall” and “Sweet Spot” by Raymond, “Around, Forever” by alto saxophonist Alex LoRe, “Mantrois” by Weisenberg, and the title piece by Stranahan and LoRe — along with two short, fully improvised pieces (“Where Am I” and “Distant Signal”) and arrangements of guitarist Kurt Rosenwinkel’s “Mr. Hope” and singer-songwriter Elliott Smith’s “Between The Bars.”

Raymond is originally from Minnesota, and there’s a fundamental niceness and sense of welcoming to his style. He solos like he’s telling you a story at a party, and his flugelhorn sound has the gentle embrace of a Midwestern church ceremony in winter. LoRe is an ideal counterpart, calm and slightly distanced, but leaping excitedly into bebop when the tempo picks up, as on “Mr. Hope.” Weisenberg’s bass is the music’s unstoppable heart, particularly on “Around, Forever,” and Stranahan — also part of Raymond’s bass-less trio, Real Feels — keeps time by not seeming too concerned with it, hanging ornaments on the music with precision and a gentle touch.