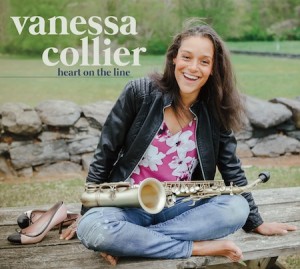 On Vanessa Collier’s rollicking anthem of self-confidence, “Take A Chance On Me,” she employs a full-throated vocal style to declare, “I know what I’m here for/ So, don’t get in my way/ And let me be me.” Those lyrics could describe an interpersonal relationship, but they also could apply to preconceived notions that festival attendees might have about Collier, a star on the blues festival circuit whose artistry incorporates r&b, soul, funk, jazz, rock and Americana. With influences ranging from Sister Rosetta Tharpe to James Brown and Bonnie Raitt, Collier is impossible to pigeonhole.

To craft her fourth solo album, Heart On The Line, the Dallas native did some heavy lifting: She composed eight of the 11 tracks, played six instruments, wrote the horn arrangements, produced the disc and sang lead vocals, as well as the multitracked background vocals.

A two-time Blues Music Award winner in the category Horn Player of the Year, Collier opens the album with a slice of sly funk, reworking Brown’s classic “Super Bad.” In the Godfather of Soul’s original version, he encouraged tenor saxophonist Robert “Chopper” McCollough by yelling, “Blow me some Trane, brother!” In Collier’s rendition, when she nods to Brown by shouting, “Take me to the bridge,” it’s a cue to deliver her own wailing sax solo. (In the album cover photo, she’s posing with an alto saxophone on her lap, but she also plays soprano, tenor and baritone sax on the disc.)

Tracks like the original compositions “Bloodhound”—which is nestled firmly in the blues tradition—and the title track—which is flavored by some New Orleans brass revelry—seem tailor-made to win over festival audiences. On the foot-stomping “Weep And Moan,” Collier’s vocals show that she can belt with authority, while electric guitarist Laura Chavez takes a pointillistic approach, adding sonic dots of color to enhance the drama. Elsewhere, “Freshly Squozen” beautifully illustrates Collier’s originality as a composer and her dynamic range as vocalist. On this ode to a mother and daughter’s relationship, William Gorman’s organ work and Collier’s tenor sax solo add emotional punch to the vivid images conjured by the cinematic lyrics.

A graduate of the prestigious Berklee College of Music and a musician comfortable blurring genre lines, Collier is artist whose music can generate some much-needed smiles during this pandemic.