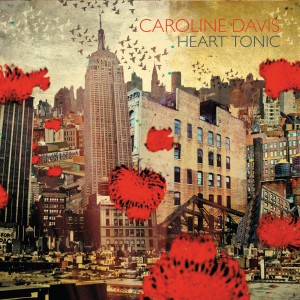 An uncompromising sonic storyteller, alto saxophonist Caroline Davis returns with Heart Tonic, an album that deals equally with an emotionally charged narrative and the science behind it.

Frequently heard in settings that feature a guitarist, Davis opts for different instrumentation here, without a six-stringer in tow. On this quintet project, trumpeter Marquis Hill helps make Davis’ compositions sound more fully developed than some of her past work. And as Davis searches for and then discovers her place among New York’s jazz cognoscenti, her writing also investigates literal matters of the heart; she took to studying the organ after finding out about her father’s health issues.

Although song titles here deal with potential loss, musically, this is not a dour set of tunes. “Fortune” hedges in that direction, with an arrangement that is slow but never dirgey, as wisps of Benjamin Hoffman’s organ color the background. Bursts of boldness demarcate sections of “Dionysian,” with its circular melody and harmonizing saxophone and trumpet. No overwhelming joyousness is exclaimed during these compositions. But the impeccably performed batch of work succeeds, even if some of the narrative that prompted the writing of these tunes is lost on listeners who haven’t taken time to read up on Davis’ conceptual base here.