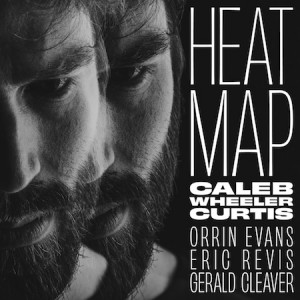 The term heat map can describe all kinds of things — from website traffic to geographical mapping and more. It’s appropriately applied here as well, as Caleb Wheeler Curtis, who bills himself as not just a saxophonist but a composer, teams with pianist Orrin Evans, bassist Eric Revis and drummer Gerald Cleaver for a set on which they bring the temperature up and down. Across 10 tracks, Curtis gives his colleagues plenty of space; for example, not coming in on sax until we’re two minutes and fifty seconds into the title track. When he does, Evans follows along with him on a challenging countermelody, all set again the tastefully busy rhythm section of Revis and Cleaver.

The tight, easy interplay between Curtis and Evans shouldn’t come as any surprise. The two played together in the Philly-based pianist’s Captain Black Big Band, with Curtis appearing on both of the band’s Grammy-nominated albums, Presence and The Intangible Between.

Curtis composed the music for Heatmap at the MacDowell Colony, an artist’s residency program in Peterborough, New Hampshire, where he spent four weeks last year. He emerged with a set of music that leaves ample space for the album’s remarkable improvisers to explore and invent.

On “Tossed Aside,” Curtis slows the tempo to stirringly evoke the feeling of finding oneself in such a state, and Evans contributes a thoughtful solo around the midway mark. Elsewhere, “Trees For The Forest” seems a reflection on the idyllic surroundings where this music was composed. The telepathy between the members of the quartet is palpable here, as well as on “Limestone,” which doesn’t so much begin as creep in, a simple melody serving as a haunting showcase for Revis.

Curtis ups the tempo to close out the album with “C(o)urses,” on which the four blaze through a frenetic melody, trading solos but never going off the rails. Finally on “Spheres,” Evans starts with a charmingly circular pattern on piano before Curtis jumps in, playing long, almost worried-sounding notes before, deep into the song, the two begin to deconstruct it a bit, with Evans dumping in the occasional crashing chord and Curtis overdubbing some challenging, random high notes. Recommended.