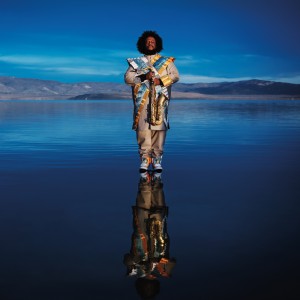 Not only has Kamasi Washington gracefully navigated the pressures of all those “savior of jazz” proclamations that have dogged him since 2015’s The Epic (Brainfeeder), he’s done so without sacrificing his sense of musical adventure, as evidenced by his new, dichotomy-laden Heaven And Earth. Though it was recorded in just two weeks with his Next Step band, some of the material here has been in the works for years, which might explain the depth to which he’s able to plumb the album’s duality.

According to Washington, the two-part recording represents “the world as I see it outwardly, the world that I am a part of” and “the world as I see it inwardly, the world that is a part of me.” Both spheres feature musical representations of struggle, love and redemption, expressed through lush orchestration and a malleable mix of styles, ranging from futuristic post-bop to fusion and folk. There are moments of freneticism and repetition that drag beyond what a piece can sustain, but they’re generally in service of the album’s greater purpose, which, taken as a whole, traces a personal evolution that speaks to larger issues around justice, unity and love.

The opener, an interpretation of Joseph Koo’s “Fists Of Fury” theme to the Bruce Lee film of the same name, sees Washington dismantle the original intro’s nervous energy, nixing the skittering strings in favor of a slower refrain that unites the instruments involved. Later, a stunning Cameron Graves piano solo comes with comping so symbiotic it almost changes the sound of his keys. And when vocalist Dwight Trible echoes Patrice Quinn as she sings, “Our time as victims is over/We will no longer ask for justice/Instead we will take our retribution,” it’s another vote for the power of unity.

The balance suggested by the album’s title plays out in the music, too. Extended moments of lyricism give way to warp-speed climaxes that resolve in waves of fuzzed-out sound to mollify Washington’s fiery, free solos. By the time the Thundercat-driven “Invincible Youth” signals a shift away from the feistier first half of Disc 1, Earth, a cinematic movement has emerged. (A film project connected to the album is said to be forthcoming; visuals also accompanied Washington’s 2017 counterpoint-as-social-commentary EP, Harmony Of Difference.)

Heaven And Earth ends by coming full circle with “Will You Sing,” whose choir-sung refrain implores, “If our song will change the world … will you sing?” It’s a strong flip side to the opener “Fists Of Fury”-—and a strong vote for music as a path to peace.