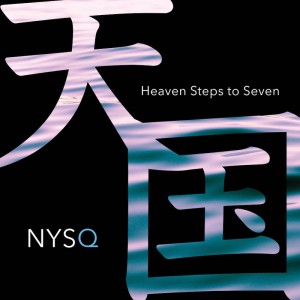 Over the course of 13 years, fans have come to expect exquisite musicianship from the New York Standards Quartet. The band consistently is dazzling. Much of the charm on its impressive seventh album, Heaven Steps To Seven, lies in the quartet’s ability to deliver powerful straightahead sounds and blend them with “outside”-leaning segments within the same arrangement. One particularly compelling example is an eight-minute rendition of the standard “If I Should Lose You” that melds traditional swing with dynamic, verging-on-chaotic sections. An eight-minute reading of Cole Porter’s “I Love You” opens with a poignant bass solo segment and eventually unfurls with knotty, unpredictable twists.

In the year that marks the centennial of Leonard Bernstein’s birth, it’s fitting that the band—Tim Armacost (tenor and soprano saxophones), David Berkman (piano), Ugonna Okegwo (double bass) and Gene Jackson (drums)—would open an album with a clever, robust rendition of “Tonight” from West Side Story. Other tunes in the program include Porter’s “Every Time We Say Goodbye,” Charlie Parker’s “Cheryl” and Horace Silver’s “Peace.” A rendition of Bud Powell’s “I’ll Keep Loving You” features Berkman’s elegant pianism, Armacost’s mellow, romantic tenor tone and some fine, subtle brushwork from Jackson. On a reading of Herbie Hancock’s “The Eye Of The Hurricane” (from his 1965 classic, Maiden Voyage), Jackson gives a drum clinic as he combines overlapping cymbal crashes to fuel the locomotive thrust.

Standards remain standards because bands like NYSQ keep finding new avenues of meaning within them. Heaven Steps To Seven is a reminder that standards don’t necessarily reside in museum cases; living musicians can set the music free.