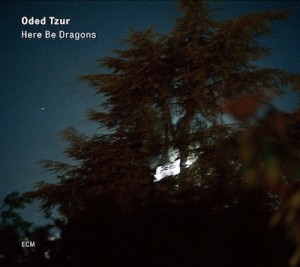 Centuries ago, the phrase “Here be dragons” was used by cartographers to designate mysterious and presumably dangerous portions of the globe, in part to explain why their maps offered no information, but mainly to warn off inexperienced travelers from those perilous parts. In the liner notes to his third album, Here Be Dragons, the Israeli-born saxophonist Oded Tzur offers a story in which he imagines the famed renaissance architect Filippo Brunelleschi on a journey bankrolled by Dutch cartographers to find those dragons; part parable, part shaggy dog tale, it ends with a koan: “There are no dragons, but here is a song.”

Tzur’s playing is a lot like that story of his, quietly fantastical and full of narrative feints. His tone is light and sweet, with a whispered airiness that’s enhanced by his preference for the tenor’s upper octaves. There’s a vocal quality to his phrasing on “Can’t Help Falling In Love,” the album’s only cover. But instead of Blue Hawaii Elvis, his version sounds like Art Garfunkel at his most angelic, making the tune seem more like a prayer than a love song.

On the ghostly opening to “20 Years,” his arcing lines occasionally sound like gusts of wind moaning through an old house. By contrast, when working off of the effervescent, Caribbean-tinged groove of “The Dream,” his playing becomes more liquid, his phrases bubbling and gurgling around the fluid pulse of bassist Petros Klampanis and drummer Johnathan Blake. In both cases, the quietude of his approach invites close attention.

Being both a jazz musician and a student of Indian classical music, Tzur’s approach to improvisation is by turns intriguing and mystifying. Apart from “Can’t Help Falling in Love,” the compositions here are “‘miniature ragas’ over a moving bass line,” according to Steve Lake’s liner notes. But unless you’re well-versed in the structural logic of raga playing, it’s hard to hear how that works out; more obvious are the expressive aspects of Tzur’s playing—arching slurs, slow glissandi and notes that sound as though they were bent not by Albert King but Salvador Dali. Easier to follow is Nitai Hershkovits’ piano, which offers elegantly tuneful melodies and lean, impressionist chords.

Still, it’s hard not to be drawn to an attractive mystery, and even if it’s not always obvious why Tzur plays what he plays, there’s no denying its power and beauty, with or without dragons.