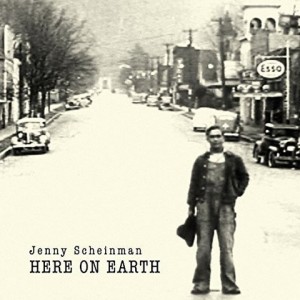 In 2015, Jenny Scheinman, a revered violinist who has operated in numerous genres, was invited to provide a live score to accompany the documentary film Kannapolis: A Moving Portrait. Directed by Finn Taylor, the film is a visual montage of archival footage captured by photographer-filmmaker H. Lee Waters, who traveled the south and mid-Atlantic to document small-town life between 1936 and 1942. Packed with moments of joyous ecstasy and wind-swept solemnity, that soundtrack has now been released as an album, Here On Earth, and its 15 tightly compressed tracks reveal Scheinman to be a meticulous interpreter of emotion and a composer of cinematic vision and scope. The instrumentation for Here On Earth was lifted directly from a scene in the film in which three musicians—playing fiddle, banjo and guitar—entertain a crowd at a dance party. To reproduce that sound, Scheinman appears with a rotating panel of guests, bringing together, in various assemblages, the inimitable talents of Danny Barnes (banjo, guitar and tuba), Robbie Fulks (acoustic guitar and banjo) Robbie Gjersoe (resonator guitar) and Bill Frisell (electric guitar). The tracks are short, but potent in their ability to paint a scene. “Rowan” is all rolling hills and sun-dappled trees, its gentle melody coddled by colorful accompaniment from banjo and guitar. Opening cut “A Kid Named Lily,” meanwhile, is stormy and foreboding, with a choppy violin statement that rides with bumps and jolts atop a hard-strummed banjo. And though this is very much a period album, it refuses to be trapped in the past. “Delinquent Bill,” which features Frisell at his slinkiest and most harmonically elastic, delivers some undeniably modernist group interplay. Meanwhile, the spiritual yearning distilled on “Pent Up Polly” is timeless. “Esme” and “Road To Manila” speak to a calmer, gentler sense of satisfaction, but when you’re in the mood for a good old-fashioned hoedown, turn to “Bug In The Honey,” which simply erupts with happiness.