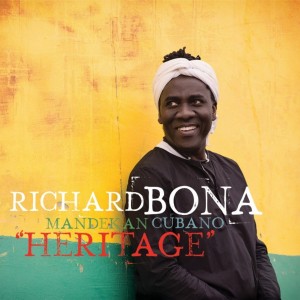 Bona was born in Cameroon and blessed with perfect pitch, Richard Bona began playing balafon at age 4, quickly moving on to organ, guitar and, at 16, bass, inspired by a Jaco Pastorius record.

He moved to Europe to study music and eventually landed in Paris, where he became a session player for Manu Dibango and Salif Keita. Never content to stay in one place, musically or geographically, he moved to New York and worked with Pat Metheny, Larry Coryell and Steve Gadd. His blend of soul, pop, jazz, folk, Latin and African music make his style hard to pin down, and the sounds of Heritage continue to document his unpredictable creativity.

Wanting to explore the connections between jazz, Cuban and African music, Bona put together Mandekan Cubano with five like-minded compatriots. The result is another outing with the loose feel of an improvised session. Pianist Osmany Paredes is a particular delight, his brief, sharp solos on “Cubaneando,” “Santa Clara Con Montuno” and “Kivu” sparkling with a gem like brilliance.

The playing is energetic, but Bona mixed the tracks to produce a dreamy, trance like state. Mandekan Cubano plays with an understated virtuosity, their laidback grooves carrying you forward with supple, elastic brilliance. The music explores the interlocking rhythms of Cuba and Africa, as well as ensemble pieces that show off the band’s expertise.