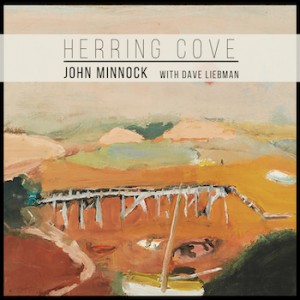 Singer John Minnnock’s third album chronicles different facets of the gay community, a subject still rarely discussed in jazz. Erick Holmberg’s lyrics in these songs emphasize the challenges that Minnock, his family and friends still face. But courageous storytelling isn’t the only strength of Herring Cove. Minnock’s phrasing seamlessly veers from romantic to lighthearted and acerbic alongside an accomplished crew that includes saxophonist/producer Dave Liebman.

Minnock, a veteran of New York’s jazz and cabaret scenes, consistently uses his dramatic inflections to serve the songs’ contrasting tones. This comes across on his tongue-in-cheek kiss-off, “Tell Him I’m Fine,” highlighting his sharp timing alongside pianist Enrique Haneine. On his dialogue with singer Deborah Lippmann, “Now There’s You,” their dissimilar timbres blend as they recount the Reagan era and the emergence of the AIDS epidemic. A sense of loss also pervades the moving title track, which refers to a popular LGBTQ+ beach in Provincetown, Massachusetts. While it would be a stretch to say that Cher’s “If I Could Turn Back Time” will appear at future jazz jams, Minnock’s understated performance shows how this LGBTQ+ star’s hit belongs in these spaces.