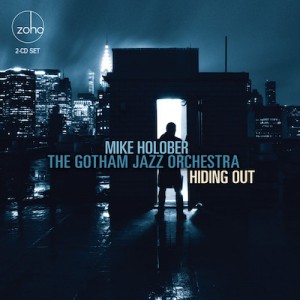 A single, repeated, bell-like tone, followed by a slow trickle of high-pitched woodwinds and muted brass, open the appropriately titled suite “Flow” from Mike Holober’s new recording with his Gotham Jazz Orchestra—a 17-piece, New York-based ensemble of the highest caliber. An idyllic scene gradually emerges as the minimalist music floats downstream and a simple melodic theme takes shape, then reemerges, shaded with a pleasantly dissonant harmony. The waters deepen from moment to moment, eventually opening up into a grand vista that continues to grow in complexity and gain momentum. The arrangement expands in breadth and the ensemble builds to dramatic crescendos, the tenor saxophone soloist soaring ever higher above the prevailing currents and occasional eddies below. The view only gets more spectacular from there, as the Hudson River-inspired motives of Holober’s composition unfold over four movements.

Equally compelling, and inspired, is the five-part suite “Hiding Out,” another Holober composition that depicts the grandeur of the natural world (in this case, the landscapes surrounding Clearmont, Wyoming). Other highlights of this double album include the opening track, “Jumble,” a large-scale original work in one movement, and Holober’s arrangement of the seldom-heard Jobim tune “Caminhos Cruzados,” showcasing trumpeter Marvin Stamm, one of nearly two dozen instrumental aces who contributed to Hiding Out.

In addition to being an esteemed composer, arranger and pianist, Holober is an avid outdoorsman whose passion for backpacking, canoeing and camping manages to find its way into everything he writes. It has been 10 years since the release of the Gotham City Jazz Orchestra’s last album, Quake, as Holober has been immersed in projects with other major big bands (Germany’s hr-Bigband and WDR Big Band, among others) and working as an educator (The City College of New York and the BMI Jazz Composers Workshop), not to mention playing plenty of sideman gigs. He hasn’t exactly been “hiding out,” so to speak, but he certainly has been less visible as a leader, until now.

With the release of this long-anticipated, epic work, Holober has brought a profound artistic vision to bear on today’s jazz scene and confirmed his standing as one of the finest modern composer/arrangers of our time, in the tradition of Gil Evans, Bob Brookmeyer and Jim McNeely.