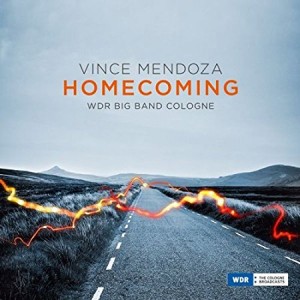 The superb new release Homecoming is Vince Mendoza’s fifth album to date with the WDR Big Band of Cologne, Germany. This reunion of the Grammy-winning composer/arranger/conductor with one of Europe’s finest large jazz ensembles furthers a long-running relationship that has yielded such acclaimed recordings as The Vince Mendoza/Arif Mardin Project: Jazzpaña (1992), Randy and Michael Brecker’s Some Skunk Funk (2005), Joe Zawinul’s Brown Street (2006) and Chano Domínguez’s Soleando (2015). The Homecoming project began in 2014 when Mendoza was invited to create a concert program of all-original compositions that would be performed live by the WDR Big Band and recorded for CD release. Mendoza’s familiarity with WDR’s cooperative aesthetic and his keen awareness of band members’ instrumental strengths works to everyone’s advantage on Homecoming; the long-established chemistry between composer and ensemble is palpable in the bespoke orchestrations and the overall organic vibe at work here. Mendoza employs the full sonic palette of the WDR Big Band, which under his baton becomes a virtual orchestra whose expert woodwind and brass doublers (adding flutes, piccolo, clarinets and tuba to the mix) deftly navigate his intricate, expansive charts. The trumpet and trombone sections demonstrate explosive power, world-class chops and tasteful jazz phrasing. Soloists make big, bold statements, rivaling the ensemble’s complex-but-never-excessive orchestrated passages in their emotional impact. Each of the seven extended tracks on Homecoming is a highlight in its own right—my favorites include the sunny jazz-samba “Choros #3,” the tuneful swinging waltz “Homecoming” and the funky-fusion opener, “Keep It Up.” Since the creation of Homecoming, Mendoza has been named Composer-in-Residence for the WDR Big Band. (His colleague, saxophonist Bob Mintzer—who serves on the faculty at University of Southern California with Mendoza—is currently the ensemble’s Chief Conductor.) This is great news for fans of both Mendoza and the WDR Big Band, whose latest joint project is a joyful homecoming that brims with densely interwoven musical ideas as it celebrates feelings of belonging and togetherness.