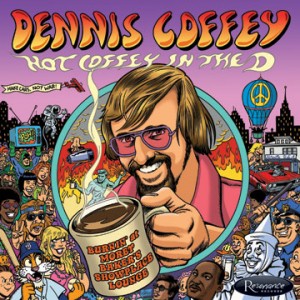 The 56-page booklet accompanying the CD version of Dennis Coffey’s album Hot Coffey In The D begins with the essay “Celebrating an Unsung Guitar Hero.” Coffey might be “unsung,” but he’s not completely obscure. In 1971, he released the million-selling instrumental hit “Scorpio,” which has been sampled in at least seven hip-hop songs. A former member of the famous Funk Brothers collective of house musicians at the Motown label, Coffey played on The Temptations’ hit “Ball Of Confusion (That’s What The World Is Today)” and on Edwin Starr’s chart-topper “War,” and he appeared in the 2002 documentary Standing in the Shadows of Motown. In 1968, the guitarist was performing regularly in his hometown of Detroit in a trio with organist Lyman Woodard and drummer Melvin Davis. Hot Coffey In The D presents a previously unreleased live program of seven songs by the trio, recorded at Morey Baker’s Showplace Lounge in the Motor City. The album features a groovy aesthetic that incorporates psychedelic rock as well as the soul-jazz sounds one might expect from an organ trio in 1968. A nearly 12-minute rendition of the 1967 Dusty Springfield hit “The Look Of Love” illustrates that these musicians were ready to go down fiery improvised trails, as does a creative reading of Herbie Hancock’s “Maiden Voyage.” The red-hot original tune “Fuzz” will send guitar aficionados reaching for the “Repeat” button as soon as this mind-blowing track concludes. To use the vernacular of the era, this live album is outta sight. (Coffey is still a mainstay on the Detroit scene, and his quartet plays at the Northern Lights Lounge on Tuesday nights.)