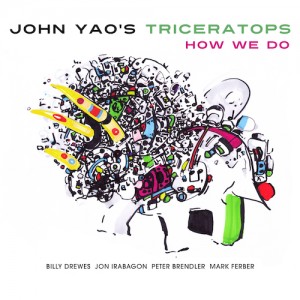 First, “triceratops” is an incredible name for a band, though it can conjure images of something large, unwieldy and awkward. But New York-based trombonist John Yao steers his new quintet, Triceratops, away from such stereotypes on its debut, How We Do.

Yao’s compositions hold the kind of steady, swinging cadence of classic Blue Note bop, but with a definite post-bop edge in their spikey harmonies. There’s a certain prickliness that comes from Jon Irabagon and Billy Drewes’ saxophones; their soloing often moves into freer territory, setting up a rewarding contrast with Yao’s more tempered statements. The group plainly sets up this divergence during the first minutes of opening number “Three Parts As One,” where the horns break off into separate bristling lines after a unified attack on the melody.

Triceratops can drag, though, notably during the solos on “Triceratops Blues,” where the long improvisations fail to capture the ear without the harmonic tension present on other compositions. But when the members hit those moments of contrast, Triceratops is at full force.