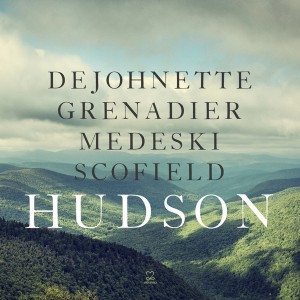 It would be easy to dismiss the supergroup Hudson as mere boomer nostalgia, but that would overlook just how vigorous, original, engaged and downright pleasurable this welcome debut sounds. Taking their common experience of life in the Hudson Valley as a backbone, drummer Jack DeJohnette, bassist Larry Grenadier, keyboardist John Medeski and guitarist John Scofield explore the music of Bob Dylan, The Band, Joni Mitchell and Jimi Hendrix, as well as other takes on a cultural moment when jazz and rock met.

Though everyone contributes equally, Scofield is key, because his succinct, lyrical guitar melodies really sing. Try chiming in on “Lay Lady Lay,” which DeJohnette invests with a reggae feel, or “Up On Cripple Creek,” to experience just how nuanced Sco’s delivery is. He’s is even more thrilling when he leaps outside the chords on “A Hard Rain’s A-Gonna Fall” and Medeski answers with dark burbling that recalls the boiling freedom of Bitches Brew.

The band jumps deep into free territory on the title-track opener, an archeo-futuristic jam that spins raunchy, fuzzed guitar and skronky keyboard clanks around a throbbing, ceremonial beat. The only tracks that feel somewhat less engaging are DeJohnette’s originals, “Song For World Forgiveness”—which shimmers with an East Indian, Alice Coltrane kind of vibe—and “Great Spirit Peace Chant,” a traditional-sounding tune with chattering wooden flutes that closes the album.