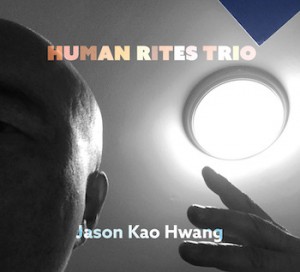 String players often have a more collaborative, cooperative sense of group interplay than their brass- or reed-playing peers, and Hwang is no exception: Human Rites Trio features a rhythm section—bassist Ken Filiano and drummer Andrew Drury—the bandleader has been working with for more than a decade.

The opening two-part suite, “Words Asleep Spoken Awake,” grants much more space to the rhythm tandem, at least early on, than to the putative leader. Following an almost martial opening fanfare, the bass is a thick, forcefully bowed boom, the drums a recurring but persistent rattle, as Hwang adds sharp, pinched-off tones. Eventually, he takes the spotlight, but not for long, and Drury gets a drum solo before the movement ends. The second half of the suite is a free-jazz blowout worthy of The Revolutionary Ensemble, Hwang zipping and diving all over the violin as the bassist and drummer thunder behind him. Toward the end, there’s a genuinely unidentifiable sound; it could be Drury bowing cymbals or it could be Hwang blasting his violin through a pedal. Regardless, it’s astonishingly loud and powerful. On other tracks, like “Conscious Concave Concrete” and “Battle For The Indelible Truth,” the trio dials down the abstraction somewhat and dives deep into the blues, bringing to mind Julius Hemphill’s work with Abdul Wadud. Which is to say that this is heavy, profound music.