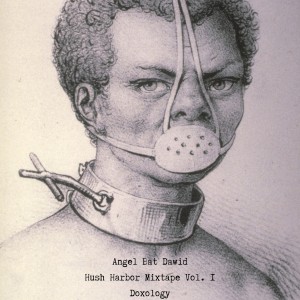 Clarinetist and composer Angel Bat Dawid has become one of the more forceful and creatively vital voices in free-jazz. Her 2019 debut Oracle was a solo collection of journeying compositions recalling the likes of Yusef Lateef and Rahsaan Roland Kirk, while her 2020 live record showcased her touring band.

Dawid’s latest release, Hush Harbor Mixtape Vol. 1 Doxology, continues the resonances of Oracle. Named for the secret places where slaves worshipped in the antebellum South, it is dedicated to Escrava Anastacia, a Brazilian folk saint typically depicted in a metal mask as punishment for her beauty. It’s a deeply involved and exceedingly referential work.

The sinuous presence of her clarinet is a guiding force throughout the 12 tracks, providing a yearning, wordless tribute to the historical subjects of her song. Opening number “Corn+Rowzz” sees a lyrical woodwind melody played over an ominous synthesizer backdrop, while the presence of Dawid’s voice singing through a vocoder on the following number “Negro Hamlet” fragments her incantatory references to proto-negro spirituals.

The subtle subversion of acoustic instrumentation through the use of vocoder, synthesizers and drum programming provides a fascinating framing for Dawid’s improvised historical narrative.

Ultimately, Hush Harbor Mixtape Vol. 1 Doxology is a record of immense depth, a passionate work of imagination and attempted sense-making viewed through the present moment of improvisation.