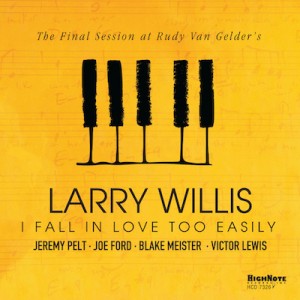 Keyboardist Larry Willis touted a catalog—including his 1974 Groove Merchant release, Inner Crisis—that today remains a hallmark of an era when commercial strains of music merged with the art-world intentions of jazz.

That Willis, before his death on Sept. 29, 2019, worked with Hugh Masekela, Jerry Gonzalez And The Fort Apache Band, on straightahead dates and with soul outfits, speaks to his perspicacity, talent and ability to hear and see things that others just could not.

A pair of Willis originals were rerecorded on I Fall In Love Too Easily—the bandleader’s final leader date prior to his death—alongside contributions from his ensemble and some choice covers. But reimagining his “Heavy Blue,” which the keyboardist first recorded during his stint in Blood, Sweet & Tears, turns a bawdy funk jam into a showcase for Willis’ jagged chording, as trumpeter Jeremy Pelt and altoist Joe Ford take turns spinning out solos over what’s become a blue, bop excursion.

The title track, which serves as the album closer and likely the last new notes we’ll hear from Willis, are appropriately melancholy and wistful. The bandleader, alone, sounds like a rainy day. But there’s still beauty to take away from this: “I Fall In Love Too Easily” initially might have been intended to depict some long-forgotten romance, but on this HighNote record, it’s about falling for Willis at the keys and how we’re all worse off for his being gone.