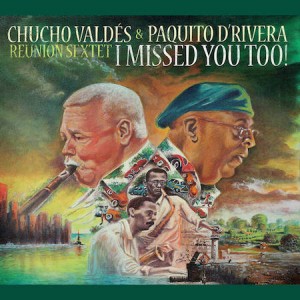 Two of the brightest stars in the Cuban firmament share their heat, light and abiding affection on this lively, long-time-coming reunion. Acclaimed internationally in the ’70s for Valdés’ great Afro-Cuban big band, Irakere, the pair has rarely collaborated since D’Rivera left Cuba in 1980 and Valdés moved to Spain some 30 years later. Featuring an estimable sextet that includes the great Diego Urcola on trumpet and valve trombone and Dafnis Prieto on drums, the recording bursts with ebullient abandon as well as the heart-on-sleeve candor of old friends reuniting in their autumn years.

Chucho’s “Mambo Influenciado,” which hearkens back to their early days, is the perfect opener, encapsulating the fiery fusion of bebop and Cuban rhythms pioneered by Dizzy Gillespie, but with a flowing, cool-jazz twist, highlighted by Chucho’s quote from John Carisi’s “Israel.” Paquito’s clarinet lows seductively, middle-register, then sparkles flawlessly up top on his upbeat waltz “I Missed You Too.”

The dark and driving modal blues “El Majá de Vento,” co-written by the leaders, has Paquito grabbing a couple of quick quotes from “It Ain’t Necessarily So” and Chucho launching tidal waves from the keyboard.